This article first appeared in the May / June 2022 edition of World Highways and is reproduced with the permission of Route One Publishing Ltd.

As road owners around the world look for lower-carbon and longer-lasting roads, the list of ingredients that go into a mix design gets ever longer. It could include recycled asphalt pavement (RAP), crumb rubber, warm-mix additives, rejuvenators or polymer modified bitumen (PMB), to name but a few.

Yet, in many markets, the testing regime remains unchanged. “Traditional testing is very popular, but it only allows a ranking of the mix,” explains Andrea Carlessi, product manager at testing equipment specialist CONTROLS. “The big limitation is that it does not allow you to understand the behaviour of the mix, it cannot detect the properties that come from adding these new materials.”

An alternative approach is performance testing. Rather than check that the various elements of a mix meet set criteria and then combining them in specified volumetric proportions, performance testing aims to look at how the mix will actually perform on a particular road.

“New technology goes in cycles. Currently we are in a phase with performance testing where we are looking for simplification,” he says. “This applies to both specifications and testing equipment”. Recent equipment launches from CONTROLS which demonstrate this theme include the Balanced Loader which can automatically perform a range of bench compressions tests and the AsphaltQube Pro, which is a research-oriented version of electro-mechanical AsphaltQube.

The US’s Balanced Mix Design approach shows how the specification simplification process could work, says Carlessi. Balanced Mix Design involves balancing out the rutting and cracking performance of a mix so that it meets the required traffic loading, location and environment. This is done by carrying out a series of tests on appropriately prepared specimens.

Although the term ‘Balanced Mix Design’ was coined by the Federal Highway Administration (FHWA) back in 2015, the first standards relating to this approach have only recently been published by the American Association of State and Highway Transportation Officials (AASHTO). AASHTO PP 105-20 Standard Practice for Balanced Design of Asphalt Mixtures sets out routes for four different approaches to balanced mix design. AASHTO MP 46 Standard Specification for Balanced Mix Design specifies minimum performance testing requirements for balanced design of asphalt mixtures. Both were published in July 2020.

One of the challenges for any road authority looking to adopt Balanced Mix Design is that there are multiple tests which can be used to test the various types of pavement distress, says Carlessi. For instance, rutting could be tested using a Hamburg Wheel Test and Asphalt Pavement Analyser, an Indirect Tensile Tests(IDT) – at high temperature (HT) or an AMPT (Asphalt Mixture Performance Tester) for flow number and dynamic modulus.

“With traditional testing, such as the Marshall Test, everybody in the world was doing the same thing, they were using the same language,” says Carlessi. “With performance testing, there is a more confused situation.” Practice varies from country to country and – within the US – from state to state.

Another downside of this disparate approach to testing is that it can limit innovation, says Carlessi: “Because there is a huge dispersion of the market in terms of the variety of testing equipment needed in different markets, it is very difficult to focus on a small number of machines in order to carry out next-level innovation.”

However, Carlessi predicts that the range of tests will reduce, as performance testing becomes more widespread and the most effective tests are identified. “My hope as a manufacturer is that, over time, we will have more defined tests which will then help push our knowledge, technology and the market further ahead,” he says. “Balanced Mix Design is a very good first step in the right direction.” 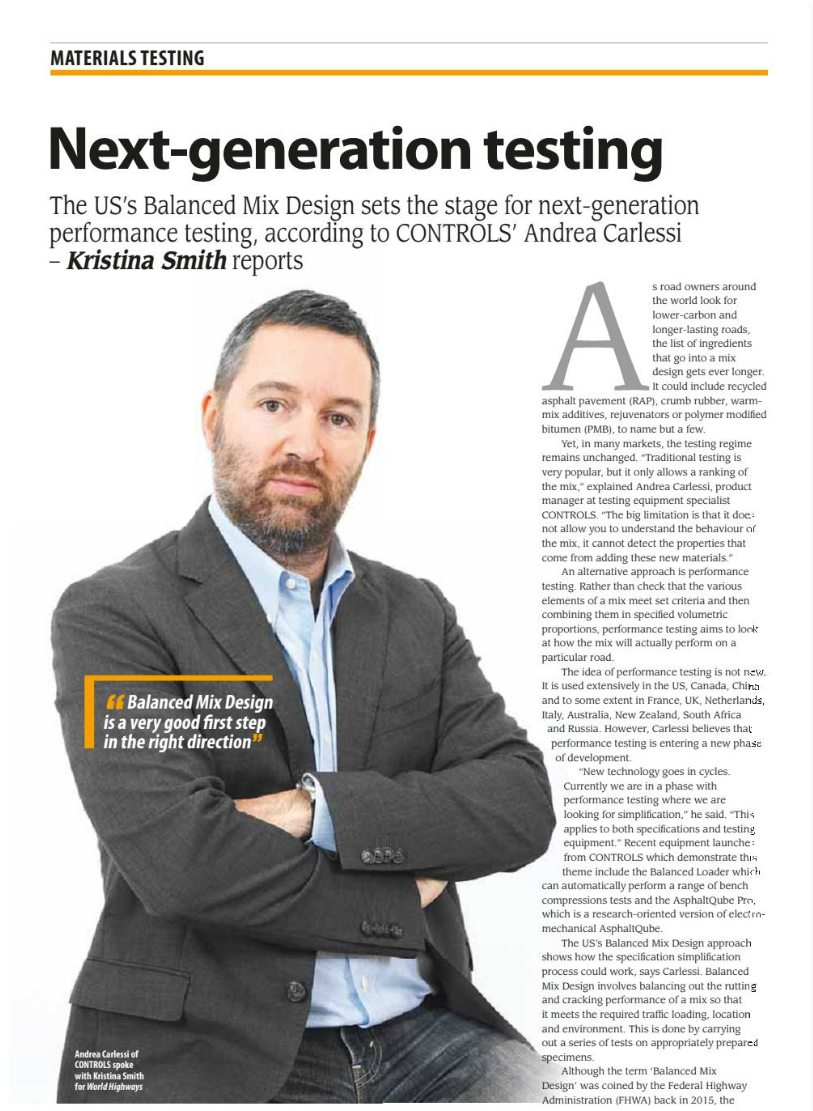 < Previous post
All posts
Next post >
Other Articles of Interest
News
Acquisition of CONTROLS by Nova Measurements
MILAN, December 19, 2019 - Controls Group (“CONTROLS”) is excited to announce that it has been acquired by Nova Measurements LLC (“Nova Measurements”).
MORE INFORMATION >
News
CONTROLS COVID-19 Response and Action
As COVID-19 continues to spread, we are closely monitoring the ever-changing developments of this pandemic. Our first priority is the safety and well-being of our employees, customers, partners, and communities we surround ourselves with each day, while continuing to serve our customers and preserving the strength of our business.
MORE INFORMATION >
Client access
Did you forget your password?
Not a member yet? Register now
Register
Client registration
Already a member? Login now
Login
Password reset
An email will be sent to the address associated.
back