In this article, we will explore all aspects of Triaxial Testing including:

What is Triaxial Testing?

A triaxial shear test is a common method to measure the mechanical properties of many deformable solids, especially soil (e.g. sand, clay) and rock, and other granular materials or powders. Source

Typical triaxial tests involve confining a sealed cylindrical soil specimen, with a height-to-diameter ratio of 2:1, into a pressurised cell to simulate defined stress conditions. The specimen is then sheared until failure which leads to the determination of its shear strength properties. The specimen will usually be saturated first, then consolidated and finally sheared, mostly under compressive conditions.

However, some further tests can also be performed with the correct equipment. For example, top cap with the vacuum attachment (necessary to create rigid connection between the load frame, the load cell and the specimen) allows triaxial tests under extension condition, Stress path or K0 tests to be carried out. Tests must be performed on undisturbed, remolded or compacted specimens that are subjected to different stress and drainage conditions (see Figure 1 and 2, below) in order to simulate in-situ stresses. Specimen sizes can range from 38mm to 100mm, although considerably larger samples can be used, provided the correct equipment is used. 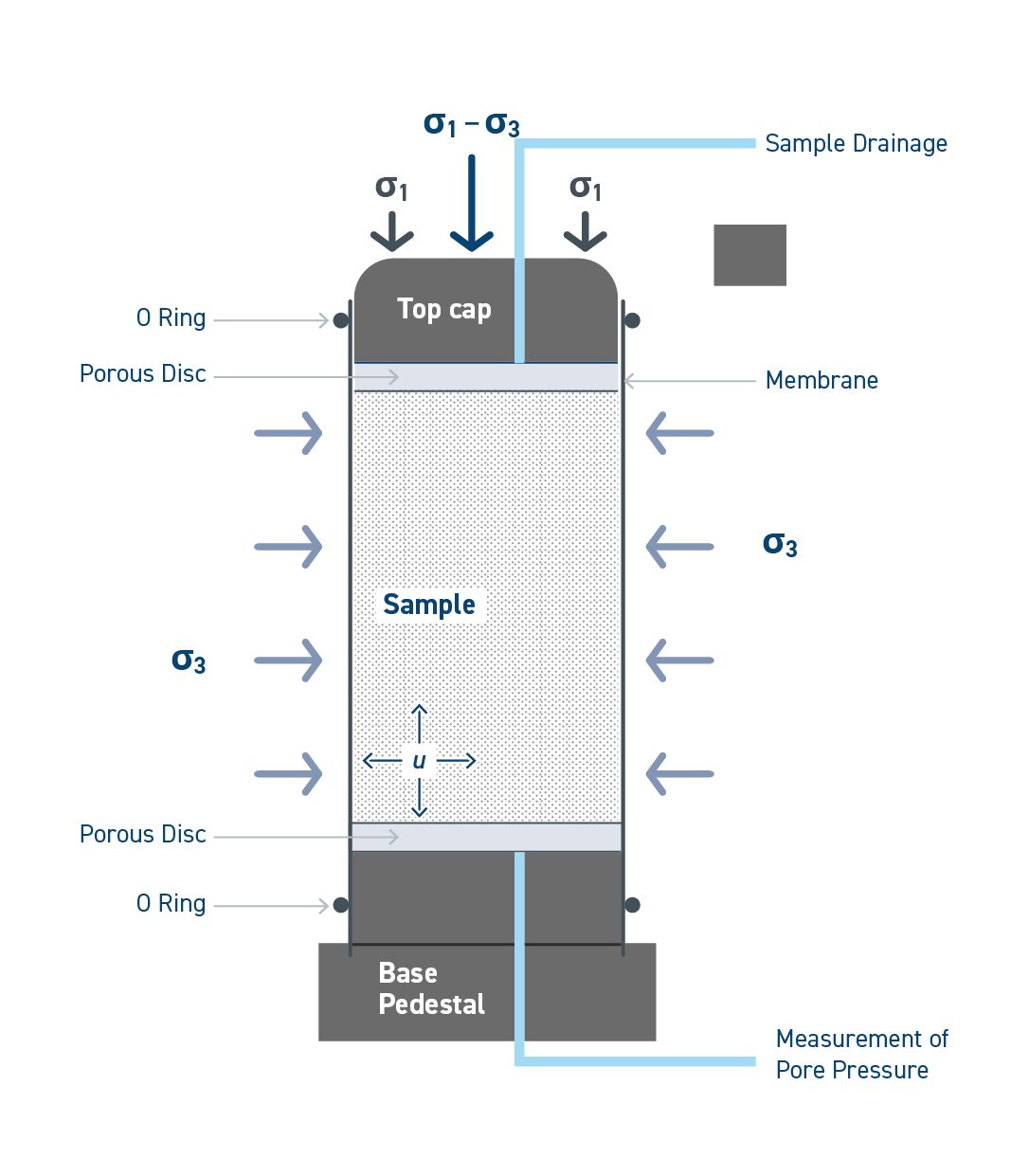 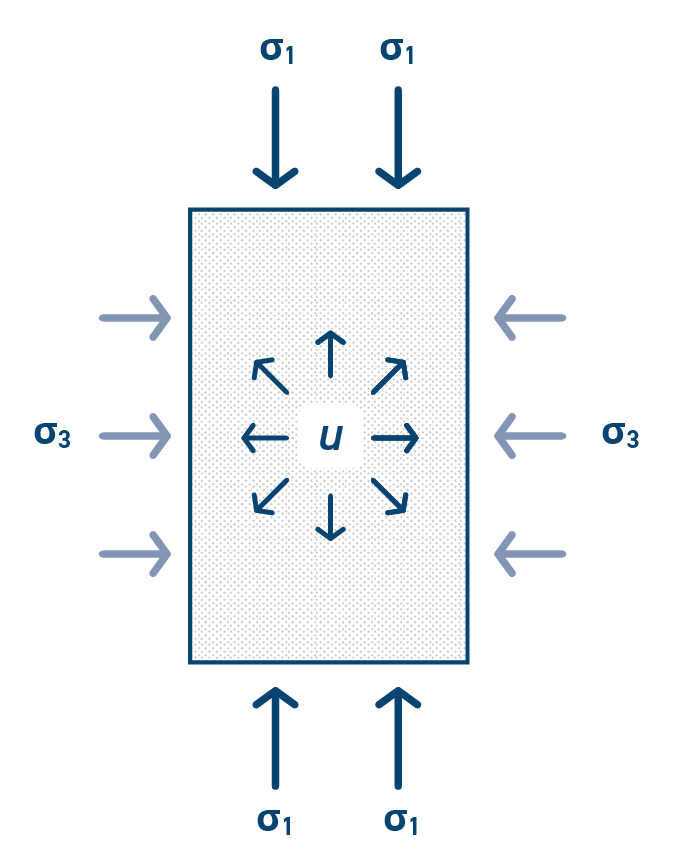 Why use Triaxial Testing?

The triaxial test is one of the most versatile, comprehensive and widely performed in geotechnical engineering. Table 1, below, lists the most common engineering issues that triaxial tests can assess. 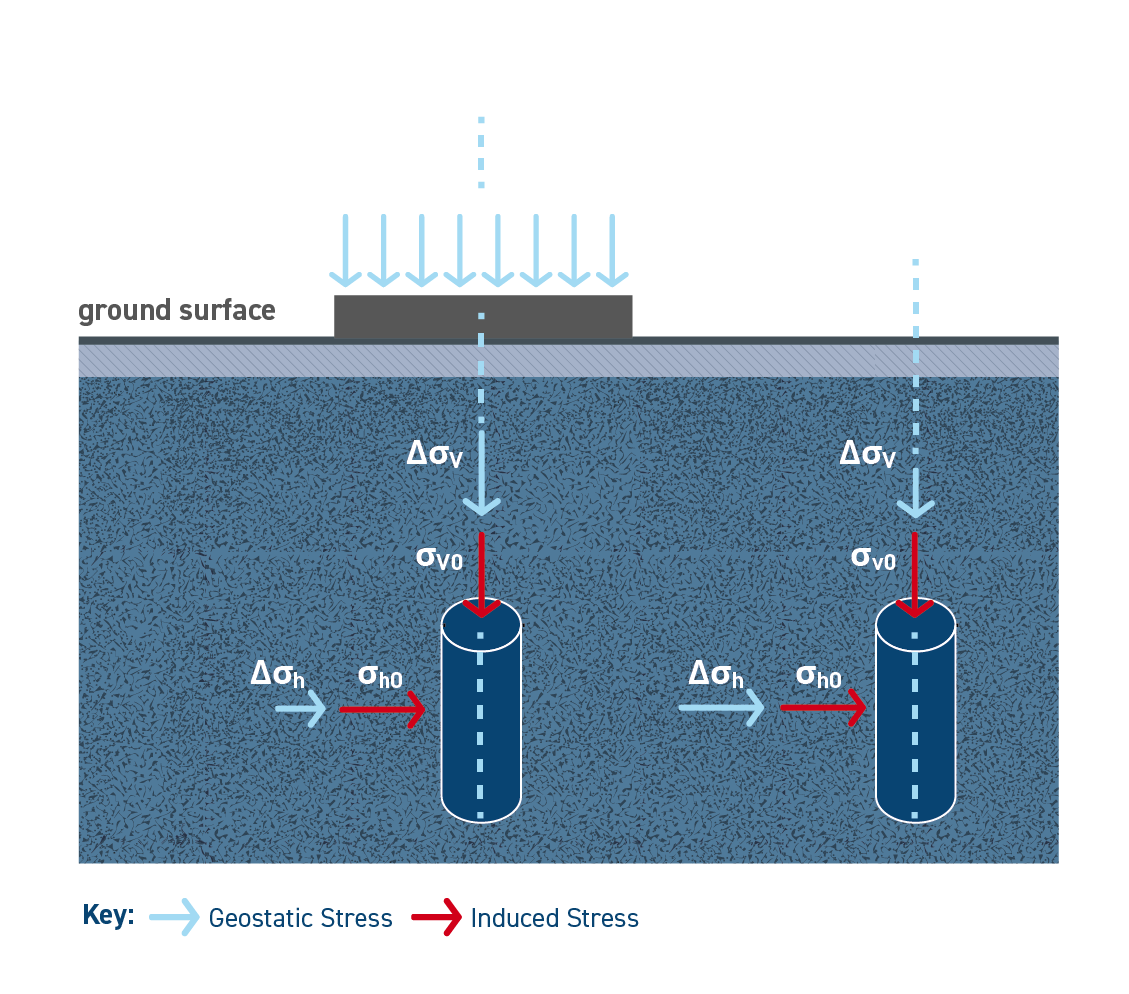 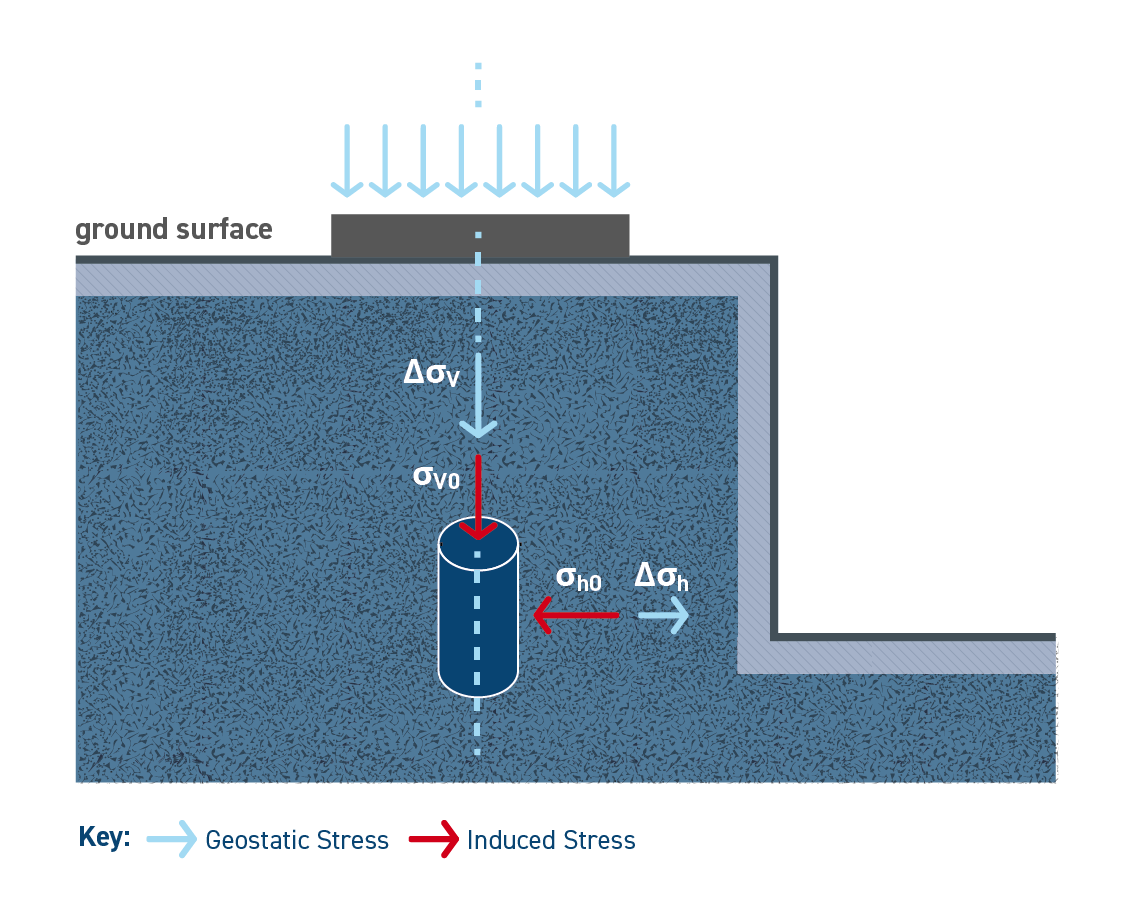 Example of different stress conditions induced by a combination of shallow foundations and excavation.

Some other tests are easier to perform, like the standard direct shear test, but these tests are not as comprehensive as they do not allow the control of the specimen’s drainage as well as take pore pressure measurements. In addition, a triaxial test helps to calculate important soil parameters such as cohesion (c’), internal angle of friction (φ’) and shear strength to be determined. The triaxial test can also be used to determine other variables such as the shear stiffness G, and permeability k.

There are three fundamental triaxial tests that can be conducted in the laboratory, each allowing the soil response for differing engineering applications to be observed:

With this method, the shear strength is measured in terms of total stress. The soil specimen is not allowed to consolidate and must maintain its original structure and water content, so that its compressive strength depends on the level of geostatic stress in the field.

Tests are often carried out on three specimens obtained from the same sample, each subjected to a different confining pressure. Provided that the soil is fully saturated, the shear strength will be the same for each test and is known as “undrained shear strength”. An additional test called Unconfined Compressive Strength (UCS) can also be undertaken with a triaxial system, simply setting the confining pressure to zero. 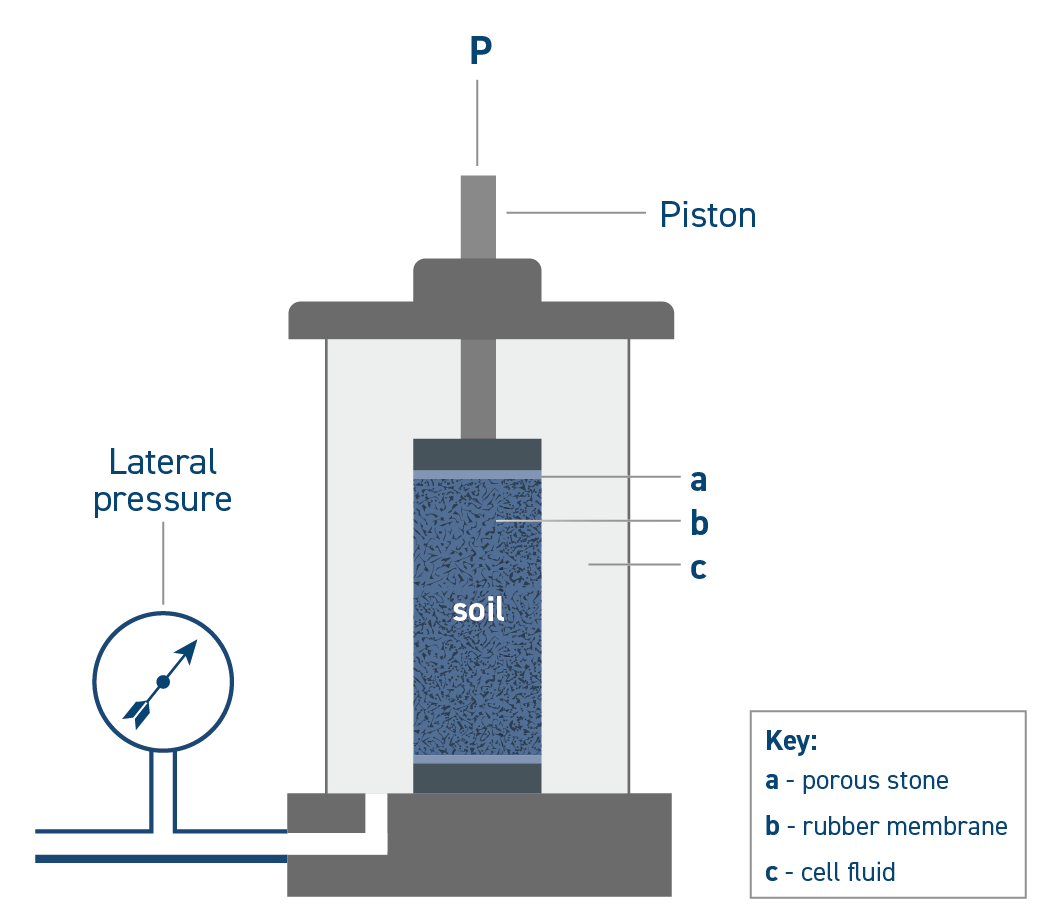 Here, the shear strength is measured in terms of effective stress. The specimen is saturated and allowed to consolidate (soil consolidation is the process that changes its structure and water content) at the required confining pressure. Once consolidated, the specimen is subjected to a controlled application of load, during which no drainage is allowed so that pore pressure can be measured.

Since the shear strength is affected by the effective stresses, by testing a set of three specimens at different confining pressures, it is possible to define the failure envelope according to Coulomb’s model and define the parameters c’ and φ’, as well as evaluating the undrained shear strength. 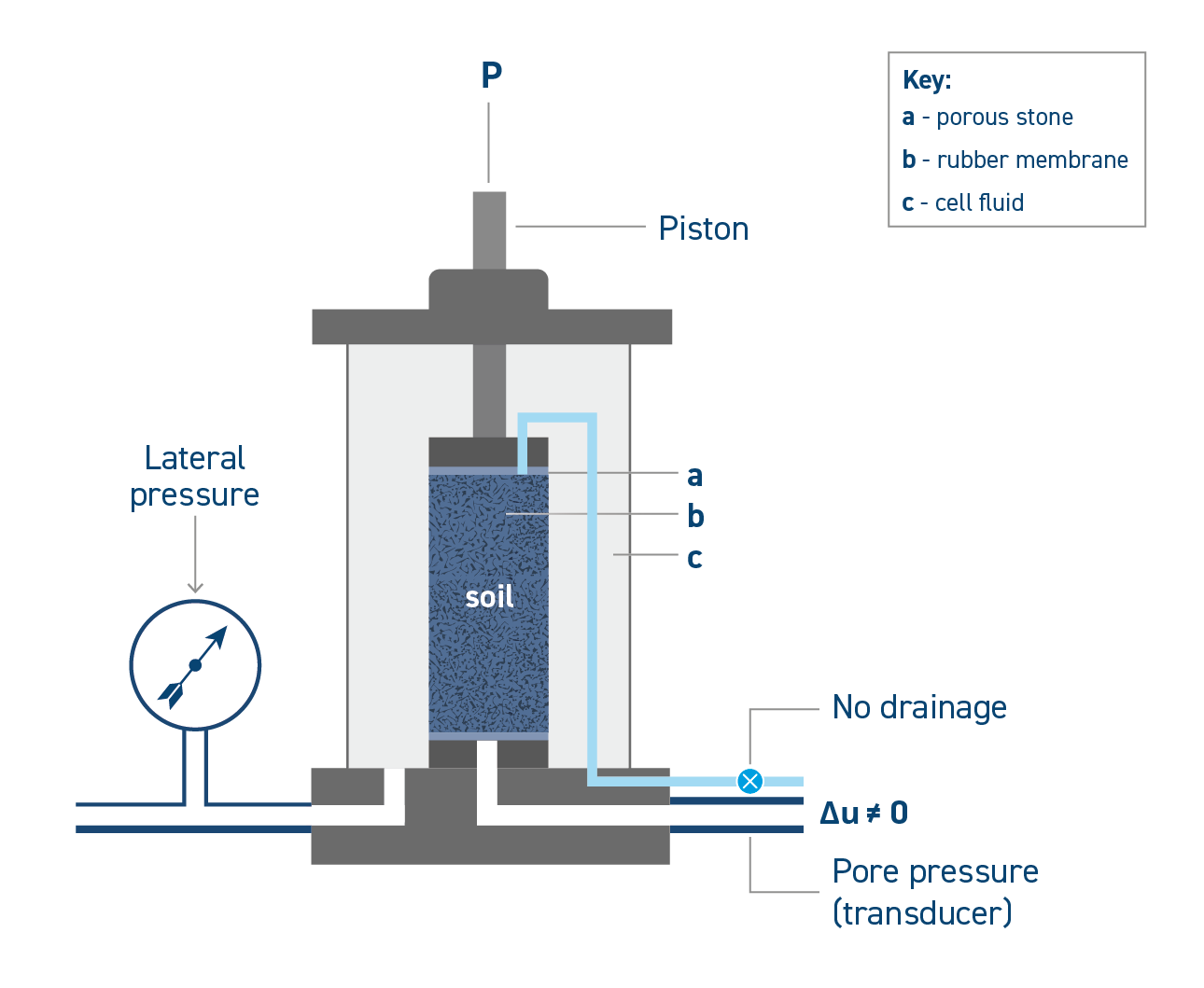 With this method, the shear strength is measured in terms of effective stress. The specimen is saturated and allowed to consolidate2 at the required confining pressure. Once consolidated, the specimen is subjected to a controlled application of load, during which moisture is allowed to drain without the possibility of pore pressure building up.

Since the shear strength is affected by the effective stresses, by testing a set of three specimens at different confining pressures, it is possible to define the failure envelope according to Coulomb’s model and define the parameters c’ and φ’. 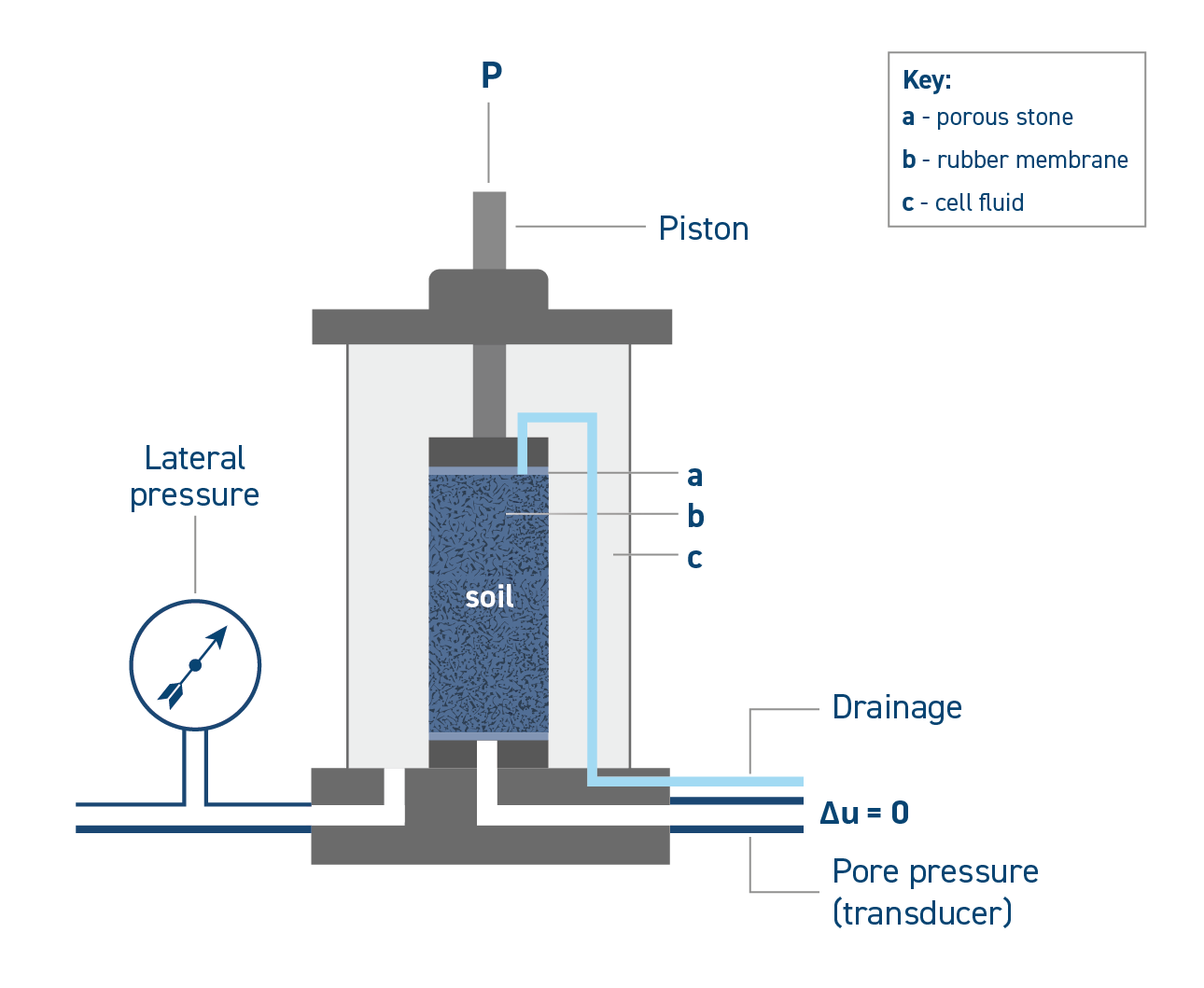 Before the test: specimen and system preparation
The test specimen must be obtained from a soil sample before being placed into the triaxial cell. For cohesive soils, this may involve trimming undisturbed specimens extruded from Shelby tubes or cut from block samples. However, for granular soils you will need to prepare the specimen directly on the pedestal using a split-part mold. Below is an example of a mold and former:

Two-part split former with vacuum attachment for preparation of remolded specimens
These molds are used for the preparation of non-cohesive specimens by compaction or vibration — as is required for triaxial testing. The mold must be placed directly on the triaxial cell’s pedestal. To ensure the membrane adheres to the mold’s inner wall, a vacuum is applied to obtain the correct diameter of the remolded specimen.

Hand sampler with cutter, dolly and receiver
Used for the preparation of undisturbed specimens from cohesive samples for triaxial tests.

Two-part split mold
Used for trimming the ends of undisturbed specimens. Once the specimen preparation is complete, we are ready to conduct the triaxial test, which comprises three main stages:

The saturation process ensures that all voids within a test specimen are filled with water, and that the pore pressure transducer and drainage lines are properly de-aired. The most common saturation method is to apply an incremental increase of the cell and back pressure into the specimen. This process gradually raises both the cell and back pressure which dissolve any air that may be present in the specimen.

During this process, the pore pressure coefficient B is calculated to determine the degree of saturation. These steps are repeated until the sample is saturated. Most standards state that a B value greater than 0.95 indicates that a specimen is sufficiently saturated. The B value is calculated as a ratio between ∆u = Change in pore pressure and ∆σ3 = Change in Confining Pressure; B= ∆u/∆σ3 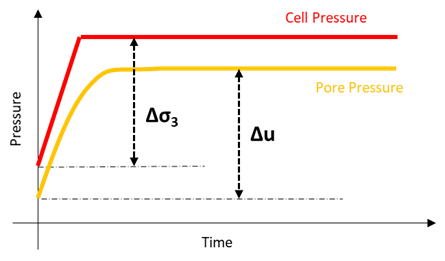 After saturation, the specimen is normally consolidated to a stress condition representative of its in-situ condition. The consolidation is normally isotropic - stresses applied vertically and horizontally to the sample are the same (σ3 = σ1). However, consolidation can also be anisotropic where σ3 ≠ σ1. In this case, tests are commonly abbreviated to CIU (Consolidated Isotropic Undrained) or CAU (Consolidated Anisotropic Undrained). Specimen consolidation is typically conducted by increasing the cell pressure whilst maintaining a constant back pressure (often equal to the pore pressure reached during the final saturation B-check). 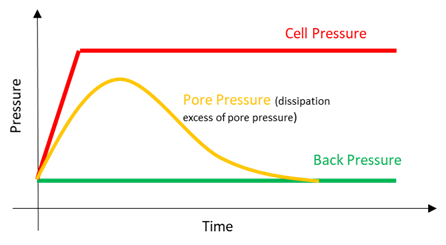 Also called failure or compression stage, shear test involves the specimen being sheared by gradually increasing the axial force (σ1) (with a constant axial strain rate), maintaining the confining pressure (σ3), until the sample fails (failure usually occurs within 20% of the axial strain). Depending on the engineering issues which need to be simulated during the shear stage, the drainage conditions applied to the specimen will determine if a drained or undrained test is to be carried out.

In an undrained test, the specimen is not allowed to drain - its volume will not change during this stage but will change in shape, leading to a pore pressure development that will be measured. If drainage is allowed, water will drain from the specimen during the shear stage, enabling the volume and the shape of the sample to change while preventing the pore pressure from changing.

As well as the shear strength being determined, the values of cohesion (c’) and phi (φ’) can also be determined using the Mohr Circle and Stress Path plots. At the end of shearing, you will need to dismantle the system and carry out post-test specimen measurements, such as the final moisture content. 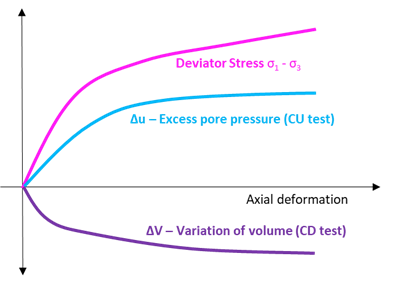 Main Components of a Triaxial System

To perform a triaxial test, the system requires a number of components:

1. Load frame: The load frame applies axial deformation to a specimen and can be shared with more than one triaxial cell. In this configuration, saturation and consolidation stages can be performed at the same time and the shear stage can be run one per time under the load frame (e.g. configuration with one frame and three triaxial cells). When the number of frames equals the number of triaxial cells, load frames can be considered as dedicated load frames whereby additional advanced tests, such as Stress Path and K0 test can be performed.

2. Triaxial cell and accessories for triaxial cells: Triaxial cells are available for various sample sizes and pressure ratings. The cell houses the triaxial specimen and is pressurised at all times during all test stages. The specimen is sealed inside a rubber membrane and then surrounded with water to create pressure that is then used to apply a stress to the sample (σ3).

Back pressure can be added to saturate the sample, if required. During the shearing stage, the axial force on the specimen increases and it is measured by the load cell, as well as the deformation measured by the displacement transducer, and the pore pressure in the sample can be measured, if required. Volume change of the sample is measured from the back pressure line using a volume change unit or pressure/volume controller. 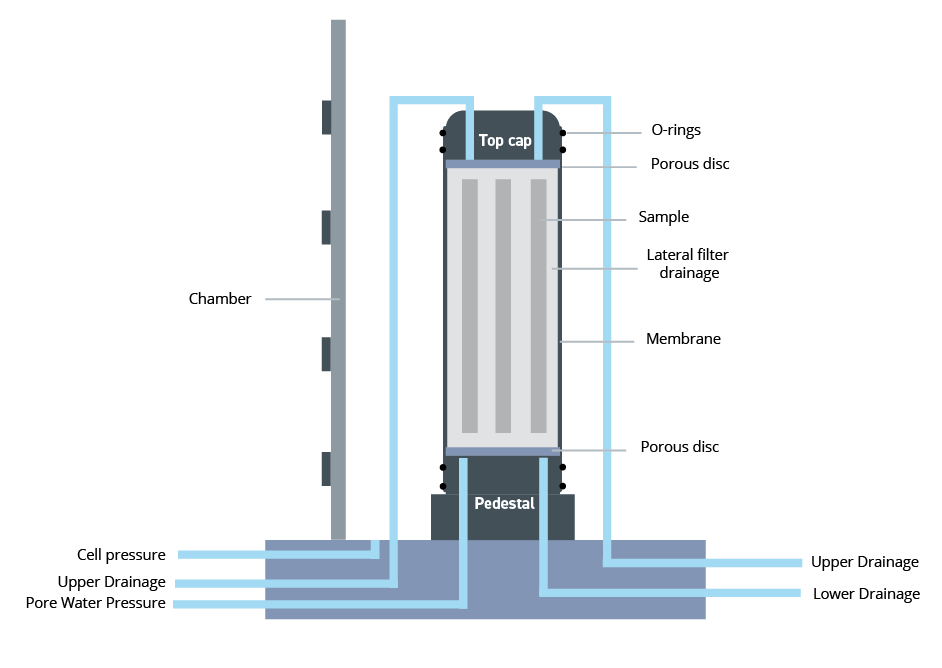 3. Pressure system: Three types of systems are available for applying cell and back pressure inside a triaxial system:

This works by applying pressure to water cylinders and generating the required cell pressure and back pressure without any need for compressed air. A stepper motor drives the unit allowing it to measure the volume change throughout all stages of triaxial testing. To facilitate the correct distribution of the water to all the equipment before starting the test, the addition of a distribution panel is recommended.

This apparatus is typically used for generating confining pressure (cell pressure) in a UU test where no back pressure and measures of volume change are required. It provides a constant water pressure by using an adjustable spring-type-dead-weight pressure system connected in-line with a pump and oil/water vessel.

4. Data acquisition: A datalogger converts analogue readings obtained from the load cell, pore water pressure and axial displacement transducers to digital data that is then stored. It can be either built-in with your standard triaxial system or supplied as an external unit. When used with an automatic system, data acquisition can also manage and control all devices needed for triaxial testing with a PC and dedicated software.

6. Data processing and reporting: The main International Standards demand that data be processed in order to produce dedicated test reports.

Triaxial Systems with analog measurements are the ideal basic solution to perform standard triaxial tests, such as effective and total stress, for laboratories that don’t require digital measurement. All data acquisition and test management are made in manual mode.

Also read our article uncovering the 10 reasons why you should perform Triaxial testing in Automatic Mode in our blog.

< Previous post
All posts
Next post >
Other Articles of Interest
Soil Mechanics
10 Reasons why your lab should adopt automatic Triaxial testing
This article will look at the origins of triaxial testing systems and briefly outline the flaws associated with manual triaxial systems...leading to the 10 reasons why you should consider new the automatic way.
MORE INFORMATION >
Soil Mechanics
Did you know that Gmax value can be evaluated using Static Triaxial?
One of the important roles of a Geotechnical engineer is to predict soil behavior and soil structure interaction resulting from earthquakes, explosions or machine & traffic vibrations in order to improve the safety of built infrastructure.
MORE INFORMATION >
Client access
Did you forget your password?
Not a member yet? Register now
Register
Client registration
Already a member? Login now
Login
Password reset
An email will be sent to the address associated.
back