It is easy to get lost in the maze of SuperPave™ Testing. Performance-based tests are numerous and complex.

Why? Because today, tests need to replicate real conditions in the field (higher traffic volumes and new construction materials).

US Road Agencies have traditionally relied on empirical methods, such as Marshall mix design, to design pavements. In the 1980s, traffic volumes and loads on roads increased significantly in the United States (US). This combined with the use of new construction materials (Polymer Modified Binders, recycled asphalt) led to early pavements failures (rutting, fatigue/low temperature cracking) affecting the performance of many American highways.

Empirical methods were not sophisticated enough to assess the reason behind these early pavement failures. This is why, in 1987, the US Government decided to create a new research program aiming to improve the performance, durability, safety, and efficiency of the US highway system. This was called the Strategic Highway Research Program (SHRP) and consisted of research concentrated in four key areas: Asphalt, Concrete, Highway operations and Pavement performance.

1. Investigate the reason for good/bad performing pavements
2. Develop improved tests and specifications
3. Work with highway agencies and the industry to implement a new system.

SHRP was completed in 1992, finalized in 1993, and resulted in the development of a new system called SuperPave™ (SUperior PERforming asphalt PAVEments).

SuperPave™ is a system of specifications, test methods, testing equipment and engineering best practices that optimizes materials selection and mixture design of hot mix asphalt to meet the climatic and traffic conditions of specific paving projects.

It consists of three elements:

1. An asphalt binder specification (“Performance Grading”)
2. A design and analysis system based on the volumetric properties of the asphalt mix (“Superpave™ Mix Design”)
3. A mix performance prediction model which was not completed during the research program and is the subject of intensive research over the last three decades.

A Wide Range of Performance-based Tests

There has been no consensus amongst researchers on which test method should be universally adopted as a number of these are unable to replicate pavement performance in the field.

For this reason, newer test methods are constantly being researched to overcome the limitations of existing ones and ultimately provide pavement engineers with more robust test methods.

Our Asphalt expert, with over 15 years' experience, has compiled a clever guide about the performance-based tests at your disposal today. This will help you gain a clear understanding on what each test does and why it was developed... 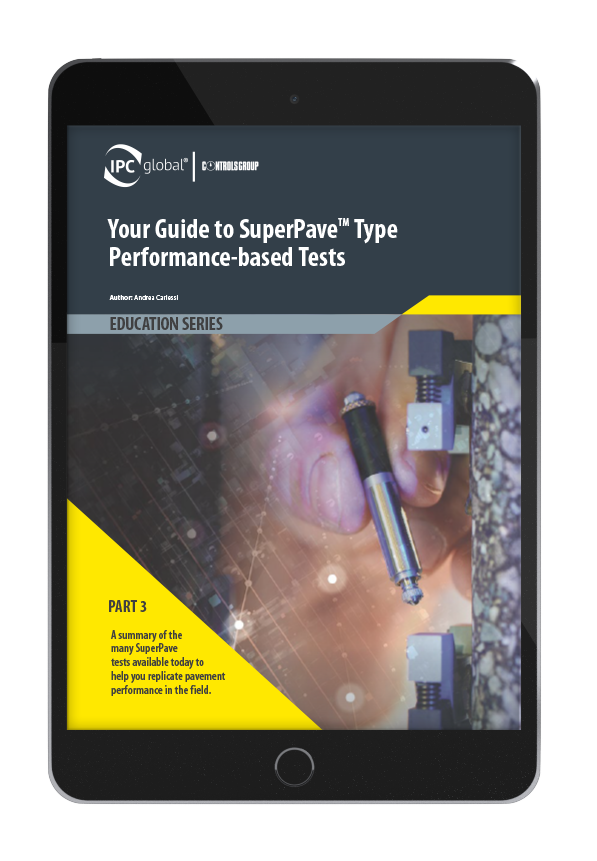 Read the full white paper. Get your copy now by registering on the right.

Read more by downloading the full White Paper
Register and download
< Previous post
All posts
Next post >
Other Articles of Interest
Advanced Pavements
Asphalt Mix Testing Fundamentals
This article will explore the fundamental aspects of performance asphalt mix testing. We will explain why asphalt mix testing is necessary, how it came about, and what options are available for different testing needs.
MORE INFORMATION >
Advanced Pavements
SuperPave™ Educational Series 02: Benefits of SuperPave™ Type Performance-based Asphalt Testing & Pavement Design
While our first Paper in our Education Series examined the role of SuperPave™-type testing, this second paper examines the wide range of significant benefits resulting from the implementation of SuperPave™-type performance-based testing and design.
MORE INFORMATION >
Client access
Did you forget your password?
Not a member yet? Register now
Register
Client registration
Already a member? Login now
Login
Password reset
An email will be sent to the address associated.
back