Your Quick Guide to Consolidation Testing

According to the "father of soil mechanics", Karl von Terzaghi, consolidation is "any process which involves a decrease in water content of saturated soil without replacement of water by air". More generally, consolidation refers to the process by which soils change volume in response to a change in pressure, encompassing both compaction and swelling. [extract from Wiki2]

In this article, we will provide an overview of Soil Consolidation Testing and we will:

Consolidation test of soil — what is it?

Consolidation tests are typically performed on a saturated cylindrical soil specimen and are designed to measure the amount and the rate at which a sample will change in height when subjected to a load.

It can be removed when a load is applied on a low permeability soil, it is initially supported by the water held within the porous of soil sample. As the load increases, a rapid increase of pore water pressure occurred inside the sample. This excess pore water pressure is dissipated as water drains away from the soil’s voids and the pressure is transferred to the soil skeleton which is gradually compressed, resulting in settlements.

To carry out the consolidation of soil, the sample must be constrained radially (normally with a stainless-steel cutting ring) and subjected to a vertical load (stress). The vertical height changes during the test, however the diameter of the sample needs to remain the same throughout.

Consolidation test is typically performed for evaluating soil compressibility. The incremental applied stress that causes consolidation may be due to either natural loads (e.g. sedimentation process), or human-made loads (for example in the construction of a building or an embankment above a soil mass) or even the decrease of the ground water table. 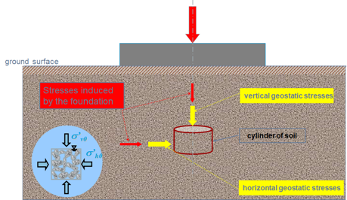 In particular consolidation tests can be used for answering the following questions:

How long does the consolidation process last?

The duration of the consolidation process is a critical issue and mainly depends on the permeability of the soil being subjected to the load and on the drainage paths. In general, consolidation in sandy soils is quick (occurring possibly immediately during construction) whereas the process may last for many years or even decades in clay soils.

The consolidation procedure is commonly separated into 3 stages:

Geotechnical laboratories can measure the consolidation properties of a soil in several ways:

One-dimensional Consolidation test
This is the simplest and most common method and is commonly referred to as consolidation test, oedometer test, and incremental loading oedometer. In this case, the lateral strain of the soil mass is neglected; applying different step of vertical load. These are commonly undertaken in laboratories due to the relative ease of the testing process and the simplicity of the equipment required. [read about Wykeham Farrance’s Automatic Computerized Oedometer and Front Loading Oedometers]

Constant Rate of Strain (CRS) Consolidation test
In addition to the most common incremental loading consolidation, various tests can be performed measuring the magnitude and rate-of-consolidation of saturated cohesive soils using continuous controlled-strain axial compression that also allow the excess moisture to dissipate. Consolidation tests using CRS cells are quicker than the standard incremental loading test. Despite being quick to perform, results are as accurate as with other methods. Using CRS cells, it is possible to monitor the excess pore pressure continually so tests can run at maximum speed further increasing test specimen throughput.

How do you perform the Consolidation test?

In a standard front loading oedometer system, the frame (oedometer) is used to apply a vertical stress to the sample using dead weight that’s added to lever arm.

You can configure your oedometer system as:

You can pre-set all test conditions with the software and then let each oedometer unit perform the entire test independently and automatically delivering consistency across all testing procedures and allowing you to perform other tasks while the test is running.

In order to increase the sample throughput, the software allows you to set up pre-set criteria for skipping in automatic mode to the next step of charge such as:

You can also use an automatic oedometer capable of providing both stress and strain control to perform the CRS test. Here, the soil is subjected to uniform deformation;  axial force, axial deformation and base excess pressure being measured during this consolidation process.

From the automatic oedometer you’d need to add the additional items:

Additional equipment is also required such as a de-aired water system, tubing to connect the cell and pressure system together and specimen preparation equipment.

Below is a typical Hydrocon configuration:

Additional equipment is also required such as a de-aired water system, tubing work to connect the cell and pressure system together and specimen preparation equipment.

We hope you find this post informative. If you need to clarify anything or need any additional information, get in touch with one of our Soil Mechanics experts.

Discover our range of consolidation testing equipment to satisfy the needs of any soil laboratory.
Explore our Range
< Previous post
All posts
Next post >
Other Articles of Interest
Soil Mechanics
10 Reasons why your lab should adopt automatic Triaxial testing
This article will look at the origins of triaxial testing systems and briefly outline the flaws associated with manual triaxial systems...leading to the 10 reasons why you should consider new the automatic way.
MORE INFORMATION >
Soil Mechanics
Did you know that Gmax value can be evaluated using Static Triaxial?
One of the important roles of a Geotechnical engineer is to predict soil behavior and soil structure interaction resulting from earthquakes, explosions or machine & traffic vibrations in order to improve the safety of built infrastructure.
MORE INFORMATION >
Client access
Did you forget your password?
Not a member yet? Register now
Register
Client registration
Already a member? Login now
Login
Password reset
An email will be sent to the address associated.
back